​
​Posted by Ben and Wade​ Vagle

TrotBot's Linkage Simulated by Michael Frey - click the image to see more of his amazing animations of mechanisms
​
​As shown below, TrotBot has an 8-bar linkage (without adding the heel/toe linkages) 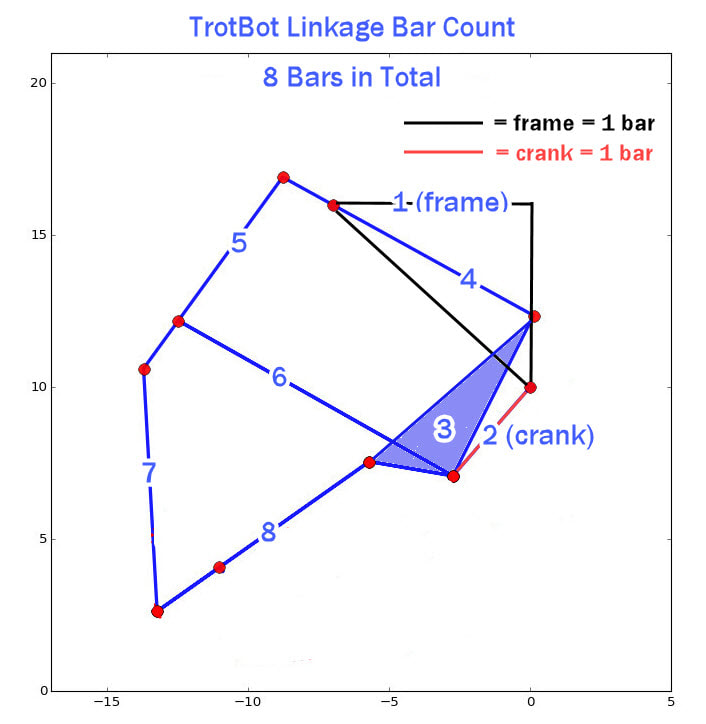 ​Below is a simulation of TrotBot's linkage with the heel and retractable toes added.
The diagrams below can get crowded and confusing, so the linkage is presented in two stages, starting with TrotBot's bar lengths without the retractable toe.  Please note that the triangle's bottom right angle highlighted in pink is not 90 degrees, but is 109.475 degrees. 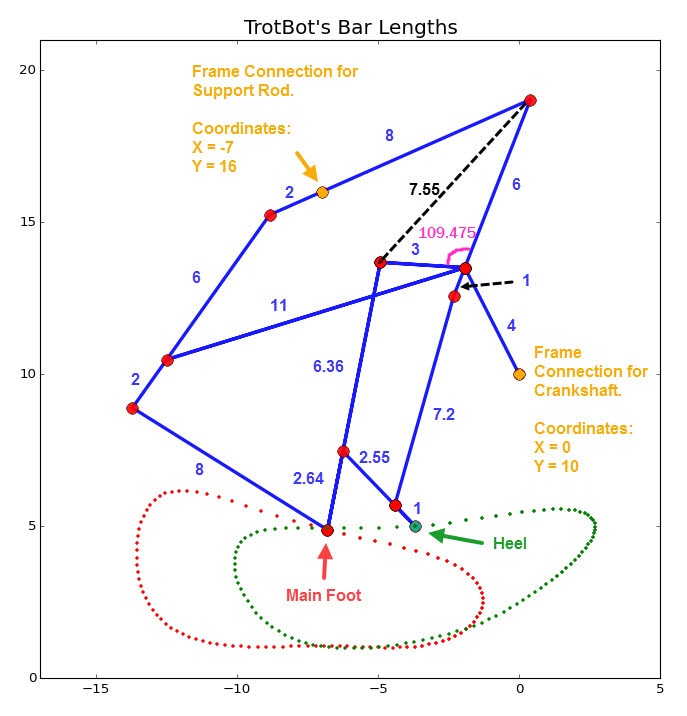 In case the 109.475 degree angle of the triangle above is confusing, below is the same linkage using a 90 degree angle instead, while shortening bar B7 from 3 to 2.83 and connecting it one unit below the crank to bar B10 (like how it's connected in our LEGO builds). 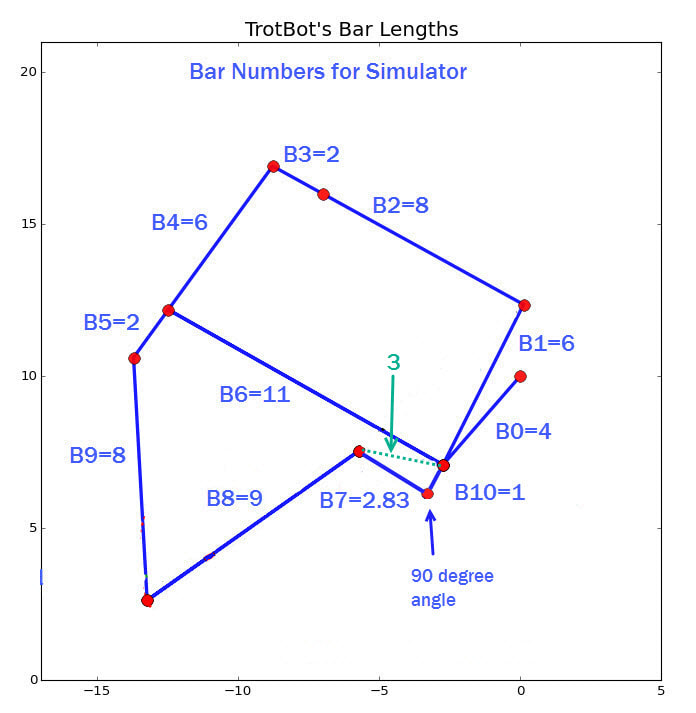 The same linkage created by connecting a shorter B7=2.83 to B10
​Below are the bar and joint numbers used in the TrotBot's Python code, which can be downloaded here:
Next, the retractable toe is added:
LEGO Prototype Performance 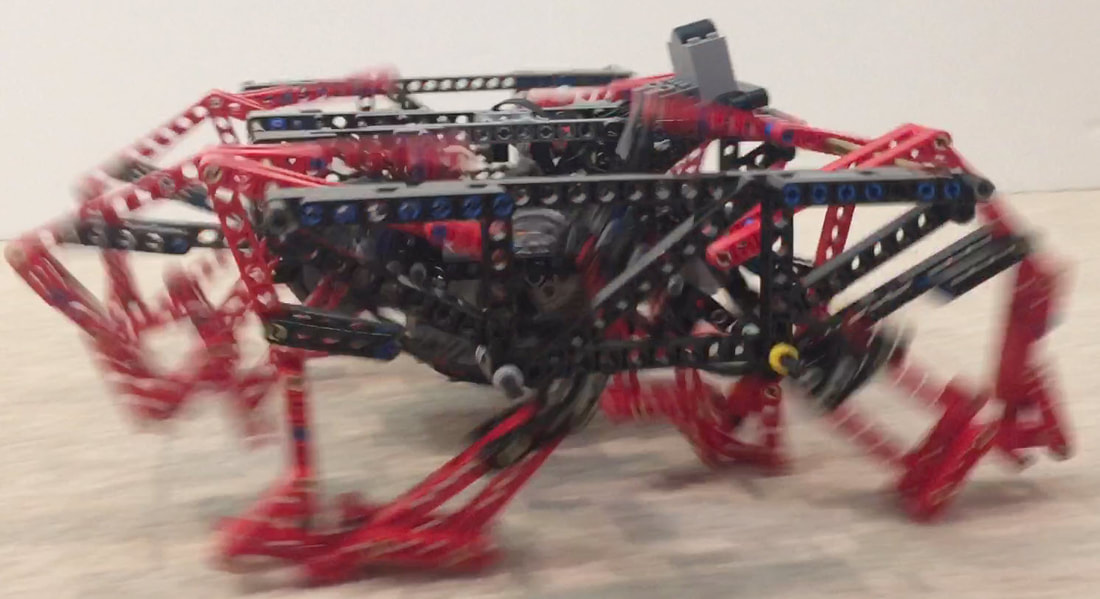 TrotBot with Heel and Toe Linkages
TrotBot's without heels and toes work well at LEGO-scale if built in a 12-leg version, but it's a wide build and the weak plastic LEGO axles can twist a lot, especially if carrying heavy loads like an EV3 brick.  If the heel and toe linkages are added, fewer legs are needed, and the torque requirements drop significantly.  Below are some examples of TrotBot's heel and toe evolution in LEGO prototypes, which we originally developed to get a decent walk out of our giant wooden TrotBot Ver 0's bumpier linkage that had only 8 legs and could barely walk without them.

TrotBot + Heel/Toe Linkages with Legs Timed for a Tripod Gait
​
First, we added TrotBot's heel linkage, which takes TrotBot's weight while the main foot is still descending, and exerts less leverage on the cranks, lowering torque requirements.  The heel also allows the rear legs to clear higher obstacles so that TrotBot doesn't get stuck astride obstacles, and it has better climbing leverage than the main foot does on extreme terrain, like when climbing stairs of 2x4s.

​Below is a video of an 8-legged TrotBot with the heel linkage added, but not the toe linkage.  Lacking toes, it has a gait that is too bumpy for the  Mindstorms' Brick - bouncing the heavy EV3 Brick up and down requires too much torque -  but toeless TrotBots  work well with the lighter Power Functions' battery box and motors, as is used in the TrotBot in the video below.
​The yellow TrotBot above used LEGO's faster but lower power medium motors geared down by 5:1.  The red TrotBot Ver 3 below used LEGO's XL motors, which helped TrotBot to grind its way over the couch while in a faster gear ratio of 5:3.
​Below is TrotBot Ver 3 with these "retractable toes".  The heel/toe linkages in LEGO are an approximation of the linkage dimensions simulated above, and don't have as smooth of a gait as they should, but they perform decently well at small LEGO-scales.  NOTE: the below video starts out with TrotBot geared up to a 1:1 ratio, which was made possible by adding toes to smooth the gait, BUT the motors quickly stalled, so TrotBots with XL motors should only be geared up to a maximum ratio of 5:3.
​We only walked TrotBot across these big rocks twice, once to see if it could make it across, and once more to film it, and even that left many scratches on the LEGO parts (unlike when climbing on softer materials, like wooden 2x4s - or the couch).   We also tried walking a toe-less TrotBot across these rocks, but it kept sinking between big rocks, and it would end up being nose down at a 30 degree angle between 2 rocks, and it wasn't able to crawl it's way forward from that position.  With our 2 tests with retractable toes this didn't happen, which appeared to be due to the toes keeping TrotBot atop the rocks just long enough for the adjacent leg to get on top of the next rock.  Two tests aren't exactly a big sample, so take these results with a grain of salt.  And of course, TrotBot with toes would eventually get stuck in those (relatively) giant rocks if we kept running tests.....and such relatively giant rocks wouldn't be feasible at large scales even if a LEGO TrotBot never got stuck!

Adding toes has some downside of course, like increasing part count, friction and complexity.  And even though they retract, they still increase the chances of feet jamming on obstacles.
​
Adding toes smooths the gait enough for the Mindstorms' Brick to be carried with LEGO's power and torque constraints:
Adding toes gives TrotBot enough foot-contact with the ground for it to be made in a hexapod version with a tripod gait:
Adding toes also allows TrotBot to be implemented in a quadruped version, which works best if some extra height is given to the outside of the feet to help keep the legs vertical, which reduces how much the robot rocks from side to side.
Toes also help to support heavier mediums, like the following metal and wooden TrotBots:
This amazing build is a work in progress by Wei Hexiang (魏 鹤翔) who is researching the use of walkers for outdoor SLAM, or "Simultaneous Location and Mapping".  His double frame design allows for shorter axles, which can be a big benefit in high torque applications.  ​
​
These masterfully designed wooden TrotBots were made by the Automata Korea Design Center - check out their youtube channel to see more of their incredible creations:  https://www.youtube.com/channel/UCrzO_vTj6EiPRk1vmfAZZbA