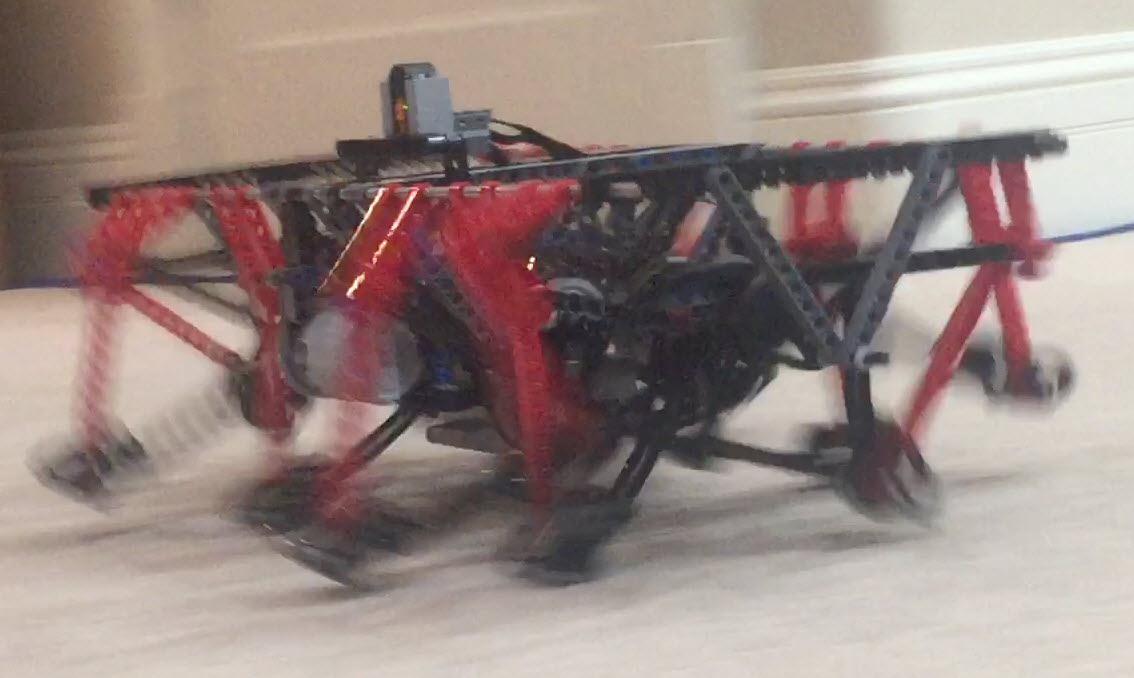 Posted by Wade Vagle
​​We developed Strider's linkage while attempting to create a 4-bar linkage capable of walking on rugged terrain, starting with the type of 4-bar linkage simulated below. We failed in that effort, so instead we experimented with pairing two 4-bar linkages to make a 10-bar linkage with front and back legs, such that an extended bar of the rear leg lifted the front foot and vice versa:

​
​You may have noticed that Strider shares a characteristic with TrotBot - we designed both mechanisms' "hamstrings" to lift high to increase step-height for rugged terrain performance: ​​​​

​
​The boat shape of Strider's foot-path results in more consistent speed and less skidding when stepping on/off obstacles, or when the terrain's slope changes abruptly - like when driving a walker out of an elevated garage - giving Strider a more efficient gait on rugged terrain. This is further explored in this summary of Prof Shigley's feasibility study of Walking Tanks.​

​
​Strider's Bar Count per Leg Pair
The more bars a linkage has, the more joints it needs. Each joint adds friction. Furthermore, the joints will always have some play, which can cause long legs with many joints to bend sideways when supporting heavy loads, especially when turning them tank-style. 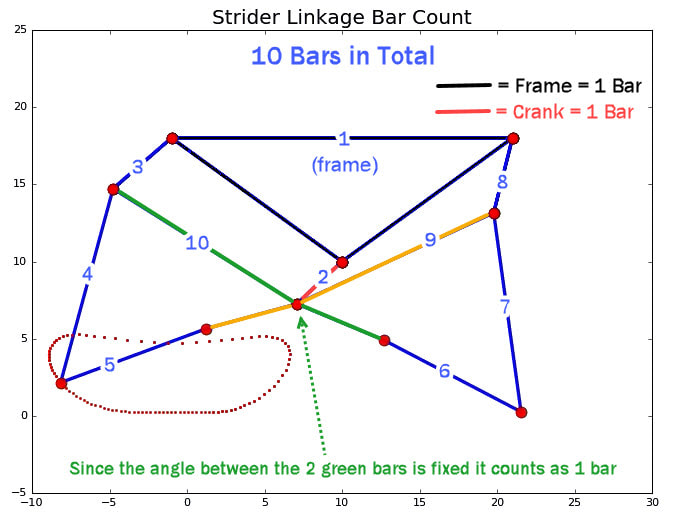 ​Below are the joint maps and bar lengths used in Strider's Python code, which you can download here.
When building Strider's linkage in LEGO, be sure to use beams with one more hole than the bar's length.  For example, a bar of length 8 requires a LEGO beam with 9 holes, because when determining the length of LEGO beams, the first hole is always counted as zero. 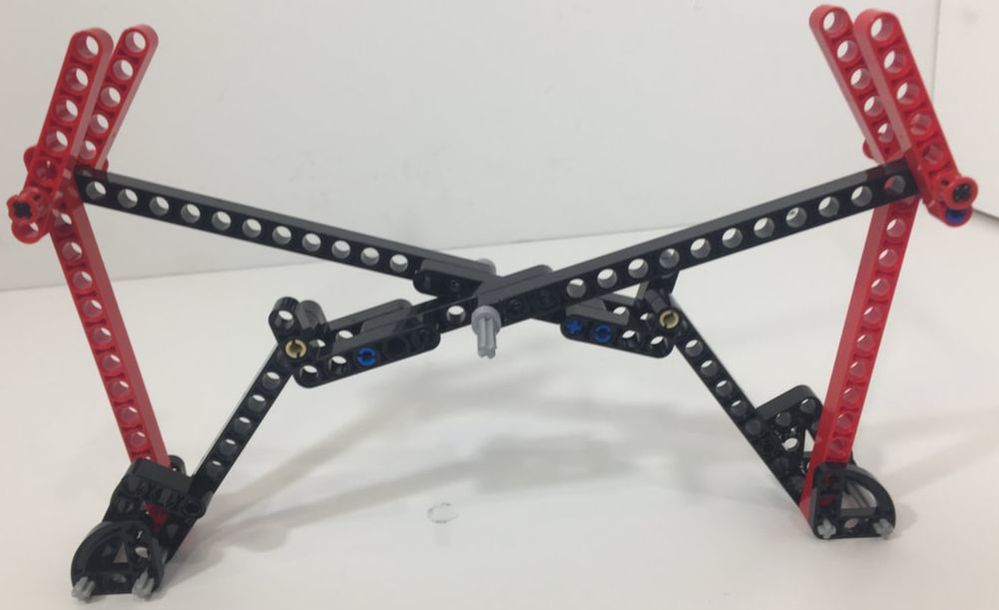 ​If you wish to create a customized version of Strider's linkage, you can find an interactive simulator on Strider's  linkage optimizer page, along with some analysis of other LEGO-friendly configurations of Strider.
Foot-Path and Foot-Speed Comparisons

Below highlights Strider Ver 3's foot-contact with the ground and foot-speed when built in a 12-leg version. Without adding feet, Strider has the most consistent speed of Strandbeest, Klann, and TrotBot. 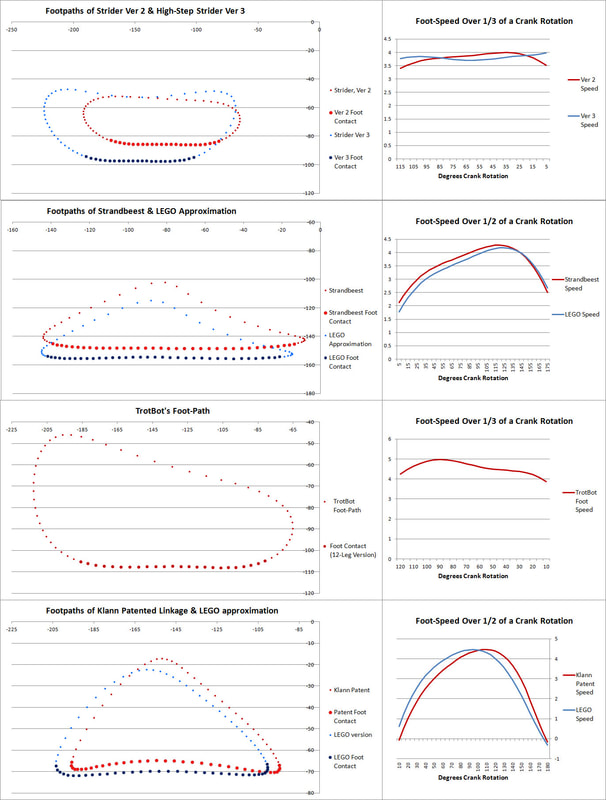 Footpaths and Speed of Strider, Strandbeest, TrotBot and Klann Linkages (without adding feet)
​LEGO Prototype Performance
Strider's mathematical modelling is tested below in 8-leg and 12-leg LEGO prototypes. To approach the efficiency of a wheel, the speed of the feet when in contact with the ground should be constant. As shown in the above graph, Strider has relatively constant speed, resulting in an efficient gait - it's the only mechanism that we've tested which can walk with a 1:1 gear ratio without the LEGO XL motors stalling.  The below test of the 1:1 ratio uses a slightly modified version of the linkage, variation 7, which is the variation with the most consistent foot-speed. Variation 7 and others are further analyzed on Strider's linkage optimizer page:
Below tests Strider Ver 3's ability to carry loads, using a lower gear ratio of 5:1. To handle the torque, the LEGO plastic axles for the 4 inner pairs of legs were replaced with steel axles before the test.
Below tests Ver 3 on a steep slope using LEGO's faster medium motors (geared down by 5:1), which supply more than enough torque for Strider robots that are not carrying heavy loads. The zig-zag surface of air filters can trip walkers, making them an easy way to test mechanism performance on irregular terrain, and they also provide small "steps" for climbing.
​Below tests Strider Ver 3 in an 8-leg implementation, using LEGO's faster medium motors geared down by 5:1.
Below compares 8 and 12 legged Striders from this analysis of shock-absorbing feet.
Below tests shock-absorbing heels, which do a better job at cushioning impacts than padded feet:
Below Strider Ver 3 with "snow boots" is tested on ice and snow.